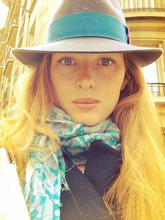 Eleonor Picciotto wasborn in Paris and raised in the watchmaking industry with a father who is retailer. After her French baccalaureate she moved to the United States to graduate from Boston University with a Journalism degree.

She spent almost two years in New York City at Harry Winston working in the events and marketing department before landing in Geneva in 2012 to handle the PR and communication of the MB&F M.A.D. Gallery. In February of 2014, she toured around the Pacific for 7 months blogging and free-lancing (JSBG, Revolution-Online, Beauty and Well-Being) while developing a project she long thought of related to what she studied for.

After spending a few years in the corporate side of brands analyzing the press she came to realize that everything had been done for the watchmaking industry: blogs, forums, magazines, websites… and that women (too often) were left on the side without a media dedicated to them about jewelry or feminine watches that are mainly dealt via chronicles, articles or special sporadic editions.

Chillin’ weeks combined to workin’ weeks, Eleonor took that time to develop The Eye of Jewelry a plate-form dedicated to the world fine jewelry, high jewelry and horological jewelry that will be launched early January 2015.

Only Watch 2015 from a feminine perspective

Helping others through charities? Only Watch gives watchmakers a chance to harness their energy and time for a good cause: children.

A Day with my Chanel Boyfriend

Where is my boyfriend? Always with me, always on me and never left behind. Pure, sleek, masculine yet feminine, timeless, chic and easy to carry at any given time. If it’s not a puppy what is she talking about?… some may wonder. There is only one answer to that!

Long critized for living on an icon- but what an icon, the octogonal shaped case of the Royal Oak designed by Gerald Genta. Audemars Piguet proved wrong in 2015, not only focusing on women but emphasizing on why the Swiss Manufacture from Le Brassus is still at its apotheosis. Six questions to Francois-Henry Bennahmias, appointed CEO in 2013.

Snowhite her the seven watches

White is simple, neutral, pure. White matches everything and can be worn anytime. Snapshot on a feminine selection of white timepieces to embellish your 2015 summer style.

The man who compared client to big cats

A man wearing two watches, because it is arythmetical and he only has two wrists. The same man who goes to Africa twice a year wearing his Safari watch for the matter. A man adapting to nature with a watch mounted on a Nato bracelet, a yellow gold Rolex Safari with a chocolate dial and bezel.