The major part of the tradeshow's surface area is dedicated to equipments, because a numerical control machine is bulkier than a dial…. I discover new cutting-edge technologies, and the funny part of this tradeshow is that it reunites super modern tools, such as the 3D "printers", with ancestral tools like those of Vallorbe.
Hence, one realizes that today, a vast majority of the finishing procedures can be automated. For example, almost all the chamfers can be machined (only the interior angles have to be manually done). Most of the polishing, especially that of the watchcases, can also be made with a machine; however, an entry level polishing machine costs 300kCHF.  Likewise, a 3 axis CNC costs 200kCHF and a 5 axis more than twice as much. The price tag for a 3D printer, very useful for prototyping, is also 300kCHF.

Horological tools, from the biggest:

In the end, with these very high costs (300kCHF is the equivalent to three good Helvetian watchmaker's annual salary) the small companies face a dilemma in terms of investment; While the "big" totally industrialize their production, the "small" have to perform many tasks manually, which increases the costs and dramatically reduces the profit margins. It is even more difficult with the AD, because it is always more complicated to showcase one's products without a large group's power. With increasing industrial costs because of a lack of investments, and their insufficient commercial strength, the small watchmakers, the independents have to rely on their creativity, to reinvent the niche market everyday to survive…

The machine that impressed me the most is not pictured; it is an 3D printer using the ALM technology (Additive Layer Manufacturing).  A thin layer of steel powder is deposited on a plate. The particles are then fused by a laser "printing head", following a pattern corresponding to a horizontal cross-section of the final object; a carriage deposits a new layer of powder which is fused like the previous one, and so on … Layer by layer, this machine can produce, for example, completely closed hollow spheres; the "necklaces" pictured hereafter, have been produced as a single piece, without requiring assembly.

Example of realisations with a 3-D printer, without any assembly: 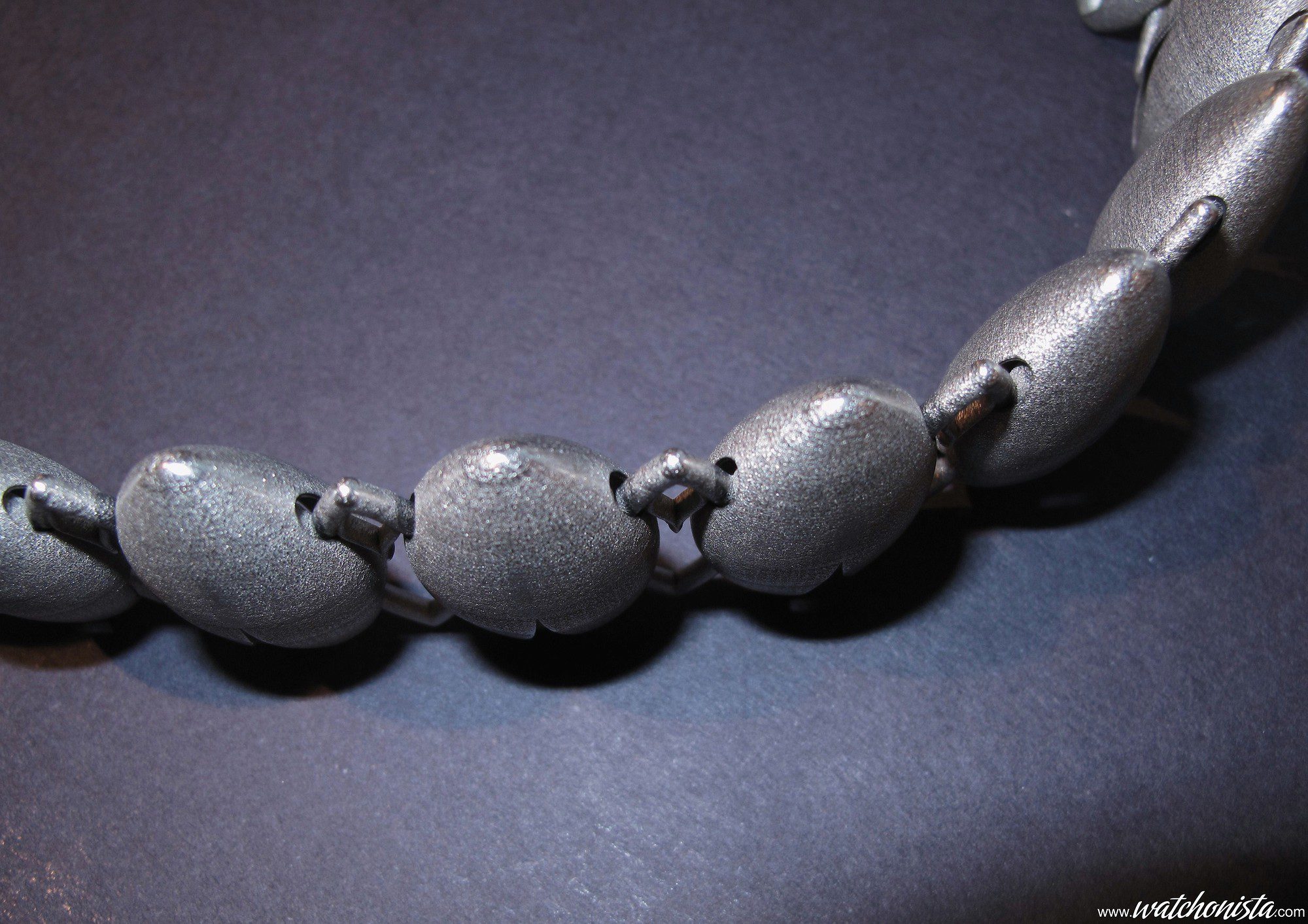 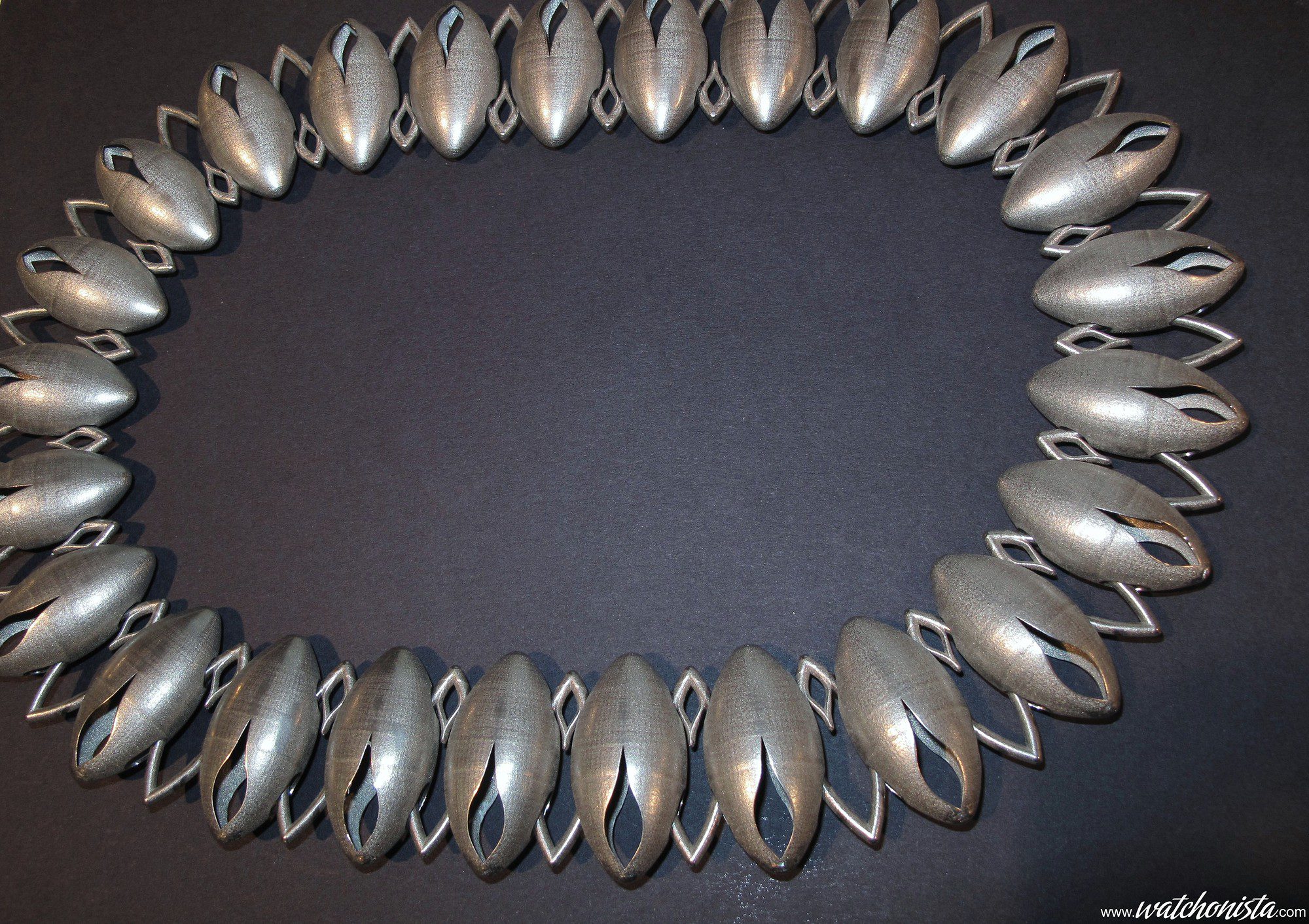 This technology is fascinating because it allows for fast prototyping directly from computerized 3D designs ; this field never stops evolving, for example the "Two-photons lithography", developed by a team from the Vienna University of Technology; this system allows for the "printing" of 3D objects at the scale of a few microns, in less than five minutes; this technological breakthrough opens prospects beyond belief and imagination.

More conventional, the balletic movement of the polishing machines' arm is still fascinating. As said earlier, they can perform most of the common polishing works, and of course 24/7. They are already massively used by the mid-range watchmaking brands; when will there be a label "hand-made" besides the "Swiss Made"?


Now that you have a watchcase and a movement, you need a dial, the last and crucial step: it is the compelling item that closes the purchase… The dial or the name sitting on the dial? The question remains unanswered when one sees the quality of the dials from Lange put into perspective with the sales of Patek Philippe. Considering the real importance of the dial in the look of a watch (it serves as the watch's "face"), I will briefly talk about the providers of dials/indicators , a topic that I will develop further in a dedicated series of articles. One of the highest levels of quality available today is provided by Quadrance, one of the subsidiaries of the Manufactures Horlogères de la Fondation (Sandoz aka Fleurier). Quadrance produces, among other things, superb silver dials whose subtle glittering can be reminiscent of "Sissy – The young Empress".  Another specialty of the brand, the "Côtes de Genève" dials, that can be found, for example, in Parmigiani's Tonda collection.

Subcontractors will be also at Baselworld but not necessarily as exhibitors

Interviews
By Joel Grandjean , Editor-in-Chief
For decades, subcontractors have participated at Baselworld. Since 2002, they have had their own fair, known as the EPHJ-EPMT-SMT, which takes place in Palexpo...
05/29/2013

Behind the scenes of horology at the EPHJ-EPMT-SMT

The whole sector acknowledges that the arrival in Geneva of the greatest annual professional event of Switzerland has be beneficial in terms of accessibility...
By Joel Grandjean , Editor-in-Chief