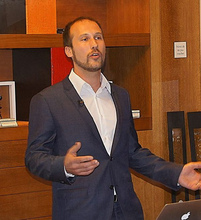 Mentored by none other than Michel Jeannot himself, emerging sufficiently well-armed from the experience to conquer the world of watchmaking communication across print media, radio and television, Nardin was the face of TheWatches.TV for more than three years. He then took a year out to travel to the far ends of the earth in search of inspiration. Returning to the business, in 2016 he rolled out the self-produced "La magie des montres, découvrir simplement l'horlogerie". He subsequently put his inquisitive nature and fierce independent spirit to good effect in specialist freelance journalism for the watchmaking press, working for such titles as Watch Around, Plazza Watch, and the Magazine de la Fondation de la Haute Horlogerie... Alas, now absent from the online pages of Watchonista, where he featured regularly, his writing has since joined the journalism ranks of one of the biggest Geneva watchmaking houses.

In Captain Nemo’s Shoes With Clerc

Science-fiction meets reality in the collaboration between the independent watchmaking brand Clerc and Sub Aviators Systems, a submarine manufacturer for tourists.

The H3, or horizontal time

HYT has put the curves behind it and is now into form cases. The H3 is a colossus, black and rectangular. For the first time, the famous liquid hour indication is linear, the minute one as well, and the driver of this mechanism is a gem of micromechanics.

The mechanical twist of the Cartier Crash

The dissenter and languorous Cartier Crash is back in play. However, it has decided to “forget” its dial in the boxes and to strip to the bone to reveal the delicious curves of its heart.

Vacheron Constantin is back from Asia

The Geneva-based Maison plays with lights and textures on this fall’s new timepieces. Cases and dials have been covered in hundreds of diamonds and the “Patrimony” collection unveils a new discreet elegance.

Ateliers Louis Moinet in all its glory

On 10 July Jean-Marie Schaller received the “Merit for Development of Arts and Technologies” award from the International Institute for Promotion and Prestige (IIPP).