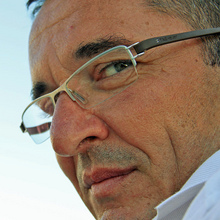 Having occupied some of the most enviable positions in the media hierarchy, from manager of the luxury goods division of the Edipresse group to man-on-the-spot in charge of its expansion in Spain, Cattaneo, an intelligent and investigative economic journalist, has continued to pursue his career with characteristic vigour and style. Editor-in-chief of La Tribune des Arts until 2011, responsible for bringing the Grand Prix d’Horlogerie de Genève to international audiences as far-flung as Singapore, Beijing and Paris, he has brought all his analytical skills to bear in watchmaking collaborations with some of the highest-ranking publications. His loyal relationship with Watchonista began in 2014 and continued until his communication career bloomed and saw him join a major Geneva institution.

Size does matter, according to Armin Strom

With the Edge Double Barrel introduced in spring 2016, the Bienne-based watchmaking brand revisits the design of its collection. This watch is bigger, more powerful and has more character, but still features the brand's traditional DNA.

Zenith and the world's finest cigar

The manufacture in Le Locle has come out with the attractive El Primero Chronomaster 1969 Cohiba Edition to celebrate the fiftieth anniversary of the famous Cuban brand. How can one wed a chronograph with a cigar? See for yourself...

Uncovering the heart of its Tonda for the world to see, Parmigiani Fleurier reveals an elegant movement and components with a quality finish.

This Tonda Quator only stops on February 28th. And yet…

Parmigiani Fleurier has put forward an amazing annual calendar with an accurate moon phase that only has to be wound three times every four years.

Jean-Marc Wiederrecht has designed the Visionnaire DTZ which puts a magnified jumping hour in the center of the dial, framed by a refined dome.